...a huge fan of Sumo wrestling.

"My wife thinks I'm crazy but I happened upon Grand Sumo Highlights on the English language feed of the Japanese Public Television Network NHK in 2016 and was hooked. I root for Grand Master Hakuho along with newcomers Ishiura and Endo."

“Members of my father's family came here in 1777, long before the Gold Rush. Many of the cities around here are named after them”

"It doesn't really matter what it is, I love to take things apart and put them back together. I'm fiddling with several old cars and a half dozen computers right now"

"It started when I was a kid. I had an ancient vacuum tube radio in my bedroom that my grandmother gave to me. It was always blaring the Beatles or the Beach Boys."

When SF was younger...

...his family owned a toy factory.

“I worked there as a teenager. It was a small workshop in the rough part of town.”

...he worked as a guest science lecturer for Second graders.

“It was great fun. Seven and eight year-olds have endless questions about the world around them, some of them are quite profound.”

“I was never a very good musician. I followed a girl who I was hoping to date into the band. I stayed around for a few months after she turned me down."

...does most of his writing while he is reclined.

"I have an old back injury from a fall that I took as a twenty year-old. Sitting in a chair for more than a few minutes is quite painful."

...is an accomplished artist.

“I've done many sketches. I drew the cat for the Striped Cat Press logo.” (See below) 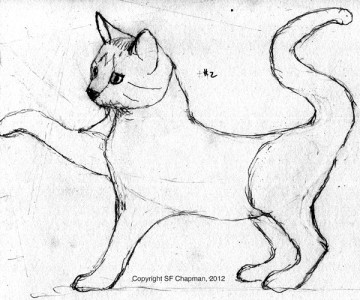