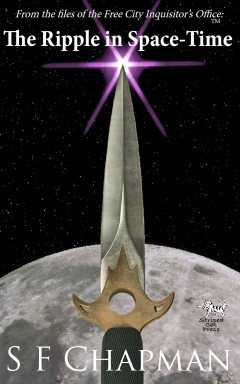 Saturn was slowly rising above the horizon.

Dimitri Verhovnyi stared through one of the many thick plate glass windows of the palace at the shimmering sliver of the monstrous gas giant as it grew ever-larger. Soon the stupendous rings would edge into view and the majestic planet would gradually shift from a glowering red to a more pleasing pinkish-orange as it climbed higher to dominate the hazy sky of Titan.

At around nine and a half times further from the Sun than the Earth, Saturn was a far brighter and more imposing presence on the huge moon than the distant and unremarkable yellow star over 1.4 billion kilometers away at the center of the Solar System.

Somewhere out there in the vastness were the imbeciles that he had engaged to carry out his schemes.

Pirates, Dimitri scornfully noted, were not known for following instructions and his two bands of marauders were no exception.

After weeks of trying, the Kuiper Belt Shipjacks had finally managed to commandeer an unarmed and unmanned space tanker that he intended to use as a base for his secret operations. To avoid detection, it was now creeping slowly towards the Asteroid Belt. Gristle’s Raiders had acquired the materials and skilled laborers that he would need from the Moon but not without using far too much force and explosives for what should have been a stealthy undertaking.

Now the Free City Inquisitor's Office was snooping about for the cause of the blast.

The great ringed planet took up most of the eastern sky now. A jagged bluish electrical storm swirled sinisterly around the southern pole.

A knock at the door interrupted his fretting. His eleven-year-old parlormaid peered leerily into the suite.

The girl was one of his many household scrubs; in a year or two, he’d profit nicely by selling her off to the Sex Slavers.

“Excuse me Master,” she bowed nervously, “I have your breakfast, if it pleases you now.”

The little wretch set the tray of food on his dining table and hurried off.

Dimitri watched the girl leave, she was obviously afraid of him, he had a well-deserved reputation that he had cultivated over many years for brawling fits of rage. But he had always treated his servants and slaves with cool detachment, especially the half dozen or so girls that made up the domestic staff.

He sat and consumed the meal.

His long dead mother, after all, had been forced into sex slavery. She’d been one of the many wives of Jonathan Kufuzu until she displeased the third Warlord of EurAfrica and was sold off as carnal fodder to Dimitri’s despicable father, Lord Pavel Verhovnyi. At forty-two years old, she unintentionally produced Pavel’s only child before killing herself on the lethal surface of Titan.

Unwelcome from birth, Dimitri was sent away as a baby to be raised by the subjugated drudges in the barely habitable selenium mines kilometers below the frozen surface of the massive moon of Saturn. As he grew up amongst the despondent and miscreant miners in the cold and dark labyrinths, Dimitri vowed vengeance against his father who had pompously declared himself the first Imperial Warlord of the Outer Reaches.

After years of plotting and planning, he’d snuck into the newly constructed Titan Palace as a teenager and stabbed his father to death.

Two days later, after murdering most of the old man’s advisors, Dimitri enthroned himself as the Supreme Warlord and took over the now vast fiefdom.

His father’s frozen and mutilated corpse still dangled from a tall picket in front of the palace as a grisly reminder of Dimitri’s ruthlessness.

But he had other scores to settle.

Even though he was a reluctant member of the Warlord Syndicate and continued to pay the onerous dues to the trade organization, he felt no sympathy towards the six other squabbling autocrats that made up the group. The Asteroid Belt and Jupiter Colonies Fiefdom was merely a weak and unorganized collection of a few widely spread outposts led by an oblivious figurehead Warlord on Vesta. The Fiefdoms of Mars and the Moon were both pleasant paradises compared to the difficult and isolated hell of the Outer Reaches.

Dimitri had nothing in common with the three pampered sovereigns of Earth; with large and compliant populations, copious resources and an agreeable atmosphere, they had no understanding of the adversities that Off-Worlders constantly faced.

He had an especially strong hatred for his stepbrother, Daniel Kufuzu. The EurAfrican Warlord had taken over for his vile father years ago and had refused to acknowledge Dimitri as a blood relative.

Dimitri sneered with contempt; soon he would inflect a horrible revenge on the Kufuzu family.

His own fiefdom had grown wealthier and more formidable in recent years and would soon surpass the status of Mars and rival that of IndoPacifica on the Earth.

Nearly twenty different mines and the huge new Kuiper Gas Refinement Facility produced vast riches for him. He had an army of “tax” and bribe collectors in his employ but his tireless slavers generated far more profits than his other endeavors. Dimitri’s methodical thugs would “arrest” hapless squatters in the far-flung outposts and drag them off to the Warlord’s forced labor facilities to work off trumped up debits that could seemingly never be satisfied.

Dimitri pushed his nearly empty plate aside; the last scraps would undoubtedly be consumed by his skinny little parlormaid. He chuckled to himself, she would be worth more with some meat on her bones.

He swaggered back to the window and listened to the latest message from the Butin Belle, “This is bluebird calling big boy. We are in sight of the winter house but the lightning has not arrived. Your package is ready to Air Mail but we need the address.”

Excellent, he thought, perhaps Gristle and his brain-dead First Mate could actually get things right.

Dimitri began his reply, “Use the smallest midget to deliver the package to my brother for arrival in one month. Half a klick makes the biggest noise. Have the guests work on the new products when the lightning appears.”

Saturn had nearly reached its zenith in the Titan sky.

He smiled fleetingly at the immense ringed planet before sending off the dispatch; soon his palace would be filled with fawning half-wits.