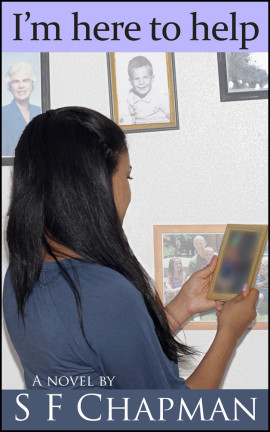 She poked at the scrambled egg curds on her plate and finally succeeded at skewering the last of them with her fork.

Her tan teenage face swiveled up to stare at me.

I’ve always been struck by the startling beauty of her eyes: the whites with an iridescent pearly glow, the pupils and irises shiny black, and long lashes like fluttering dark brown feathers fanning the orbs.

“Mom,” she said again a bit louder, “I was wondering about something.”

I felt a surge of adrenaline and the momentary panic that follows it. Whenever my youngest daughter starts a conversation with that phrase, that seemingly innocent but eventually always sinister introduction, I cringe as to what will follow. “What were you wondering about, Renita?”

She smiled with triumph, she had ventured forth with her query and been met with the proper reply. Renita put down her fork. “You know I’ve been filling out all of those applications.... It’s kind of boring, college applications are pretty much all the same.”

Renita often spoke in little bursts, like many seventeen-year-olds, letting the words escape like a flock of wary birds even before the thoughts behind the utterances were fully ready to take flight. “I typed my name and address way too many times.... and I was pretty much just kind of ignoring what I was doing.”

She was building up to a confusing crescendo that I just knew would end with a startling conclusion.

“Then I got to this one application, I don’t even remember which college it was for but they asked for a copy of my birth certificate.”

Renita stopped abruptly, as if the source of the difficulty would be immediately obvious to me.

I dithered at the mention of that particular document.

“Ooohhh..,” I said in a protracted exhalation. I felt like a slow moving beast stuck in thick, swampy mud; finally seeming to understand the unsettling scrutiny of my second daughter. “It’s in the filing cabinet, I think the second drawer.”

Her forehead wrinkled and she looked as if she might cry, but even as a baby Renita never really cried; sometimes she’d whimper, in the most extreme agony she would moan in a deep loud tone but she never did cry.

“What is it, dear?” I reluctantly asked her. I certainly did not want to venture back to this long tucked away matter.

“Well, I did find my birth certificate already,” some vital thought seemed still struggling to get out, “and I read it. I mean, I really read it for the first time.”

She looked down at the remaining bits of food left on her plate. “I don’t...I mean, I can’t figure out....” She seemed about to give up on her inquiry. “Oh, never mind!”

“No, tell me,” I said in the most maternal voice that I could draw up, trying hard to convince her and myself that I really wanted to hear about this dark and menacing problem.

“It just doesn’t make sense.” Renita looked up again, “The birth certificate says that you’re my mom and Dad was my dad.”

I nodded, no great mystery so far.

“But there’s all this other stuff that I can’t figure out. There’s just too many details about me.”

“Well, for one thing; if I was adopted, how come the birth certificate says that I was born at home and not in a hospital somewhere?”

She huffed as if she had finally revealed a great and long suppressed secret.

And indeed she had.